Some years ago, not long after my Grandma, Edna passed away I was given a bundle of papers and documents that she’d saved. As I looked through these old, worn papers and letters I realised that I had in my possession not only a perfectly documented experience of a soldier’s life in WW2 but an incredible insight into my Grandparents relationship between the years of 1940 to 1945. They would see precious little of each other during this time yet this period would define and shape their lives and that of my Dad, forever. 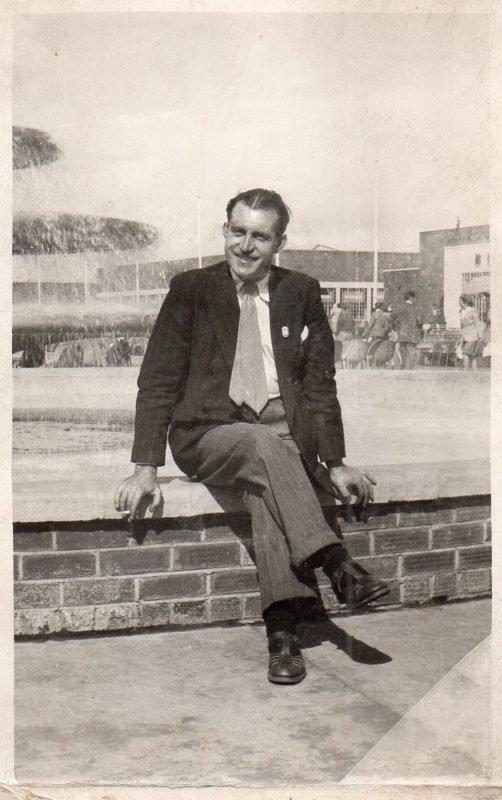 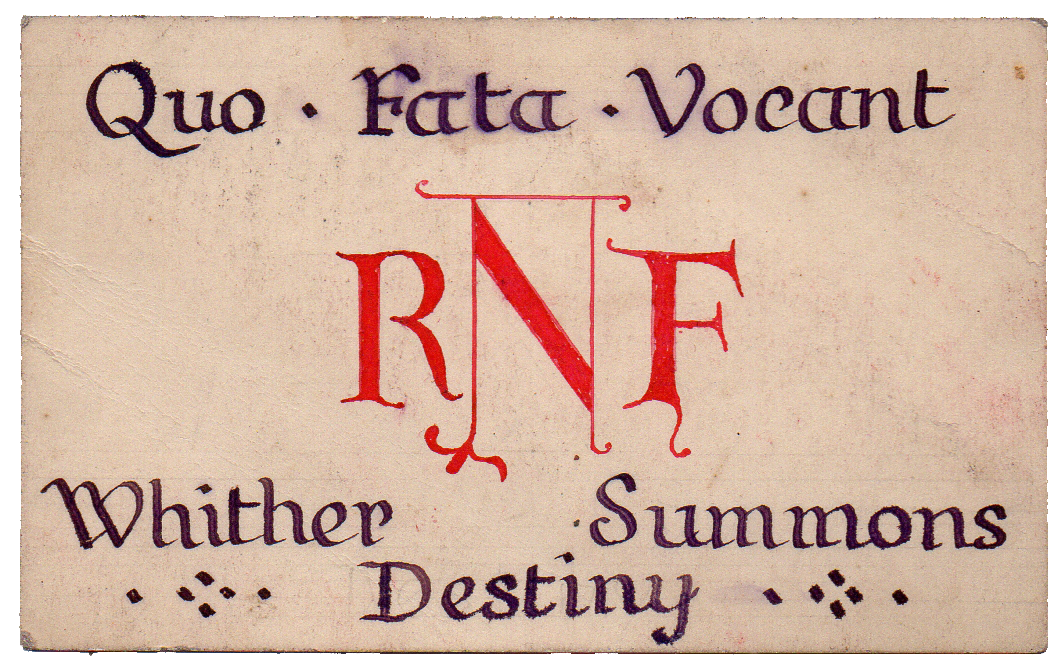 Wherever Fate May Lead Us

Matt Nixon joined the 9th Battalion of The Northumberland Fusiliers in early 1940 and was trained as a machine gunner. He was married to Edna May Nixon and had a three year old son Dennis (my Dad). The 9th RNF became part of the 18th Infantry Division and trained and served in the UK. Coastal defence was a high priority at that point in the war as the threat of invasion was very real. The Battalion moved around the UK for months until word came that after intense training they were to be rigged out with overseas dress – Khaki Drill. Their destination was an official secret but they guessed they were bound for the Middle East.

They Set Sail From Liverpool


After brief “embarkation leave” The 9th RNF as part of the 18th Division boarded the troop ship ‘Warwick Castle’ and set sail from Liverpool on 24th October 1941 bound for Halifax, Nova Scotia. As The Battle Of Britain raged on behind them they sailed into the Battle Of The Atlantic, luckily without incident to be greeted by a huge American convoy who escorted them into Nova Scotia.

A change of ship, they left Nova Scotia aboard ‘The Orizaba’ with the 12 ship convoy ‘William Sail’ back across The Atlantic to Cape Town via The West Indies. After enjoying the freedom of 4 days shore leave they upped anchor and were now headed for Bombay. As they sailed by the island of Madagascar they learned that Japan had just attacked Pearl Harbour. They would never have imagined what was to come but their fates had been decided there and then.

All plans were about to change. Training was now clearly for jungle warfare and they were diverted to The Far East to face The Japanese Imperial Army who were sweeping down through Malaysia intent on taking Singapore. 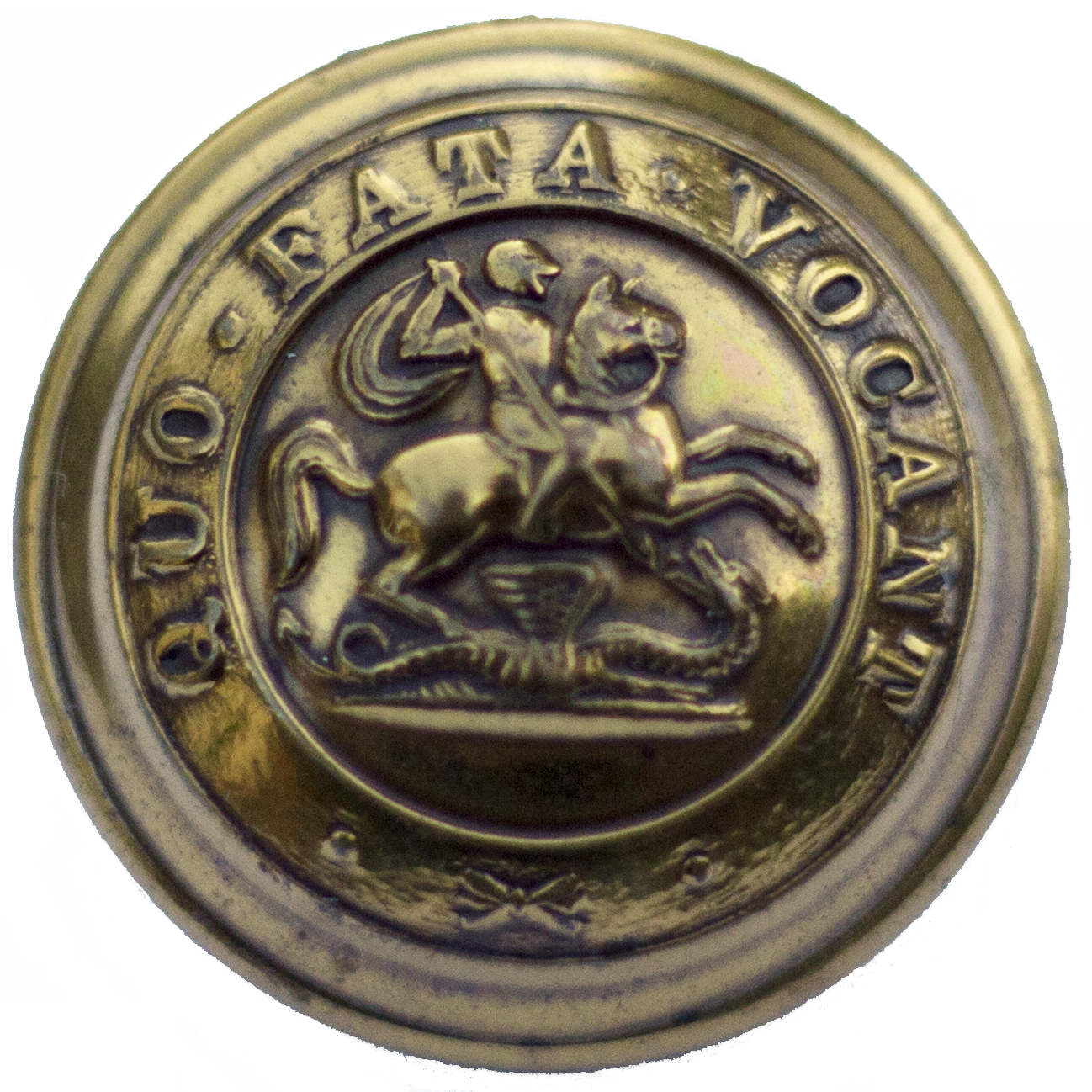 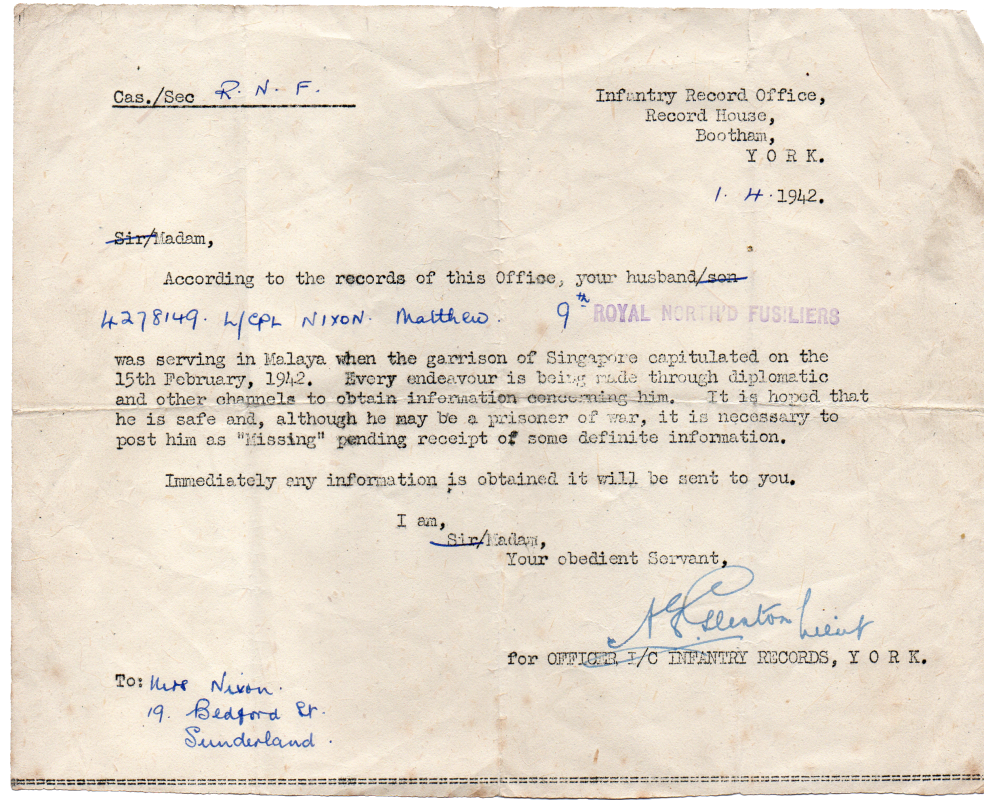 On February 5th 1942 they landed at Singapore under heavy fire and air attack. Along with thousands of other men Matt spent his first day in action of the whole war. The training well behind him now and after more than three months at sea, this was it! The 18th Division were bombed from the sky, shelled from the sea and mortared from the land in front of them. After 10 days of intense fighting it was clear that The British High Command had under estimated the enemy forces and were ill prepared. With no air cover, no Navy, the gunners in their machine gun nests watched in disbelief as the British white flag was eventually hoisted.

Army Command surrendered to The Japanese on 15th February 1942 after 10 days of intense fighting and a 3 month voyage half way around the world. What followed would become one of the most horrendous examples in history of man’s inhumanity to man.
The savagery and brutality of the Japanese war camps is well-documented and I’ve no intention of dwelling on the detail but suffice to say those poor souls were in most cases worked to death as slave labour building that infamous “Death Railway”.

My Grandad somehow got through it and lived, I’ll never know how or what he personally went through in those three and a half years but there’s no doubt it changed him and every man who lived through it, forever. My Grandma of course had no idea where he was or even if her husband was dead or alive. This went on for months, a personal hell for her. After what seemed like an eternity she eventually found out he’d been taken prisoner in The Far East and after a time Matt was able to get word to her, though very brief and heavily censored official notes with no real description of his condition or treatment. It must have felt like a lifeline though, that pull of love against the tug of war. There had to be something to hold on to during that time. 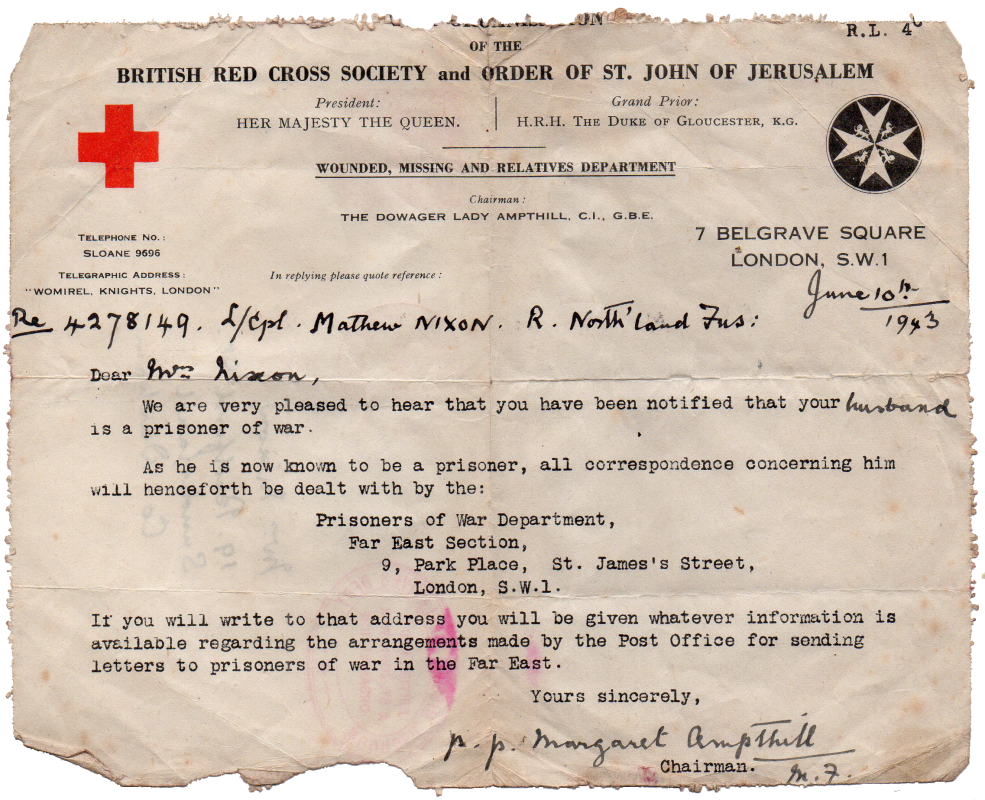 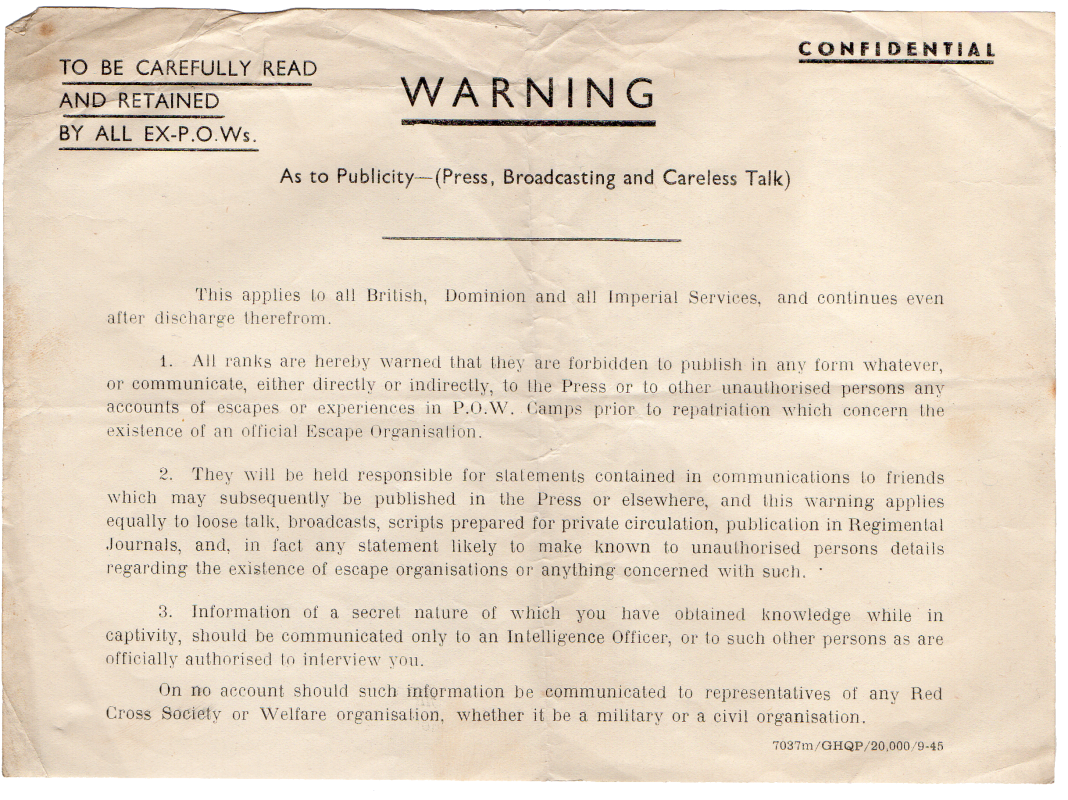 Hope, where it still lived after unimaginable hell, hung on by a thread and peace came at last on 15th August 1945. As news had filtered through that The Japanese had surrendered, those left could hardly believe it and were delirious with joy! They were going home!!
My Grandma would always say, with a sense of bitterness, that the Government intended their journey home to be as long as possible so that they could feed up the men before they got home. It wouldn’t do for them to be seen as they were, walking skeletons.

The Nights Are Longer Now, The Dreams Are Just The Same

Having never really had the time as a young kid to be able to remember my Grandad, I’ve only ever had the rare, brief recollections of Matt’s experiences relayed by my Grandma and it would always be a fleeting comment as very quickly that sadness would come over her and she’d have to change the subject. I was always aware that they were raw, painful memories and never felt that I should press her for more.

The one thing she would often mention though, as if to sum up everything, was that at the dockside in Liverpool on 23rd October 1945 (exactly 4 years after Matt sailed from the same port) desperately looking for her Husband she heard a frail voice behind her, “Edna”. It was Matt, she’d walked straight past him, not recognising this gaunt figure that now stood before her. Matt was a changed man. His son, now 8 years old, struggled to understand who this man was, calling himself his Father (Dennis was only 4 years old when he left).

My Dad very rarely speaks of this time in his childhood but he told me recently that the one thing he can never forget is the screams in the middle of the night from his Dad’s torturous nightmares. That breaks my heart.

Of course, as is common knowledge now, the mental health of these broken souls, as of those in WW1, wasn’t in any way addressed. They were told, maybe even ordered not to talk about their experiences when they got home and to carry on with their lives. They lived by a silent code. 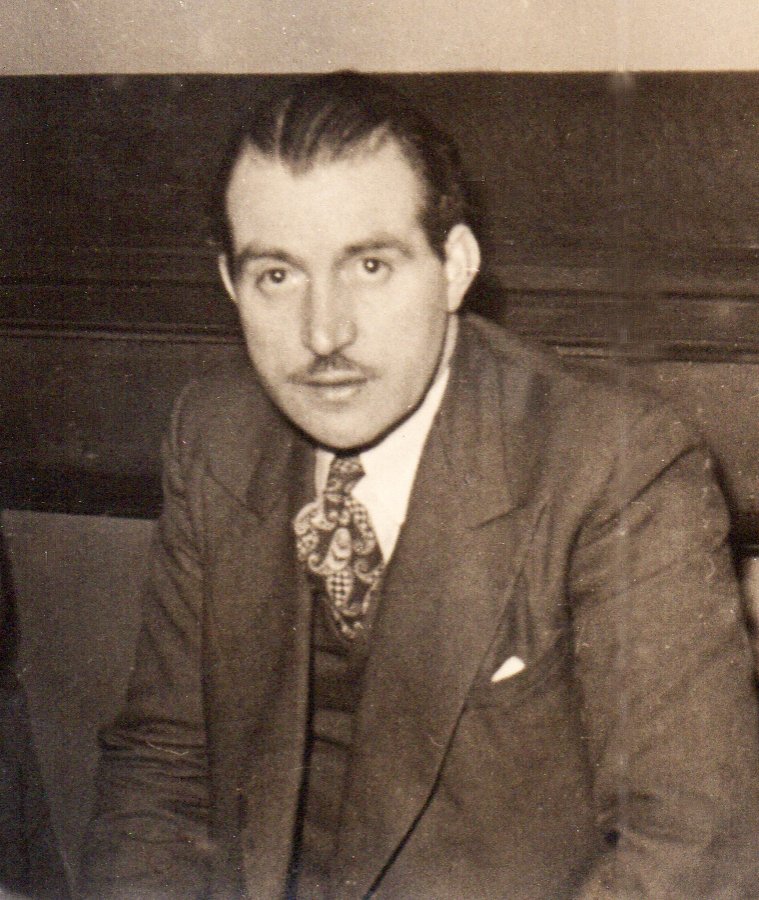