The first album in the f2g trilogy, described by Prog Magazine as “An ambitious and accomplished debut album”, put Freedom To Glide firmly on the map. ‘Rain’ flows seamlessly through its 15 tracks. The musical theme is threaded by the title track ‘Rain’ which appears in 4 parts across the album, enlisting the beautiful voices of a 100-voice choir along the way. Rich in sonic colour, Rain is most definitely a ‘journey’ both musically and lyrically. 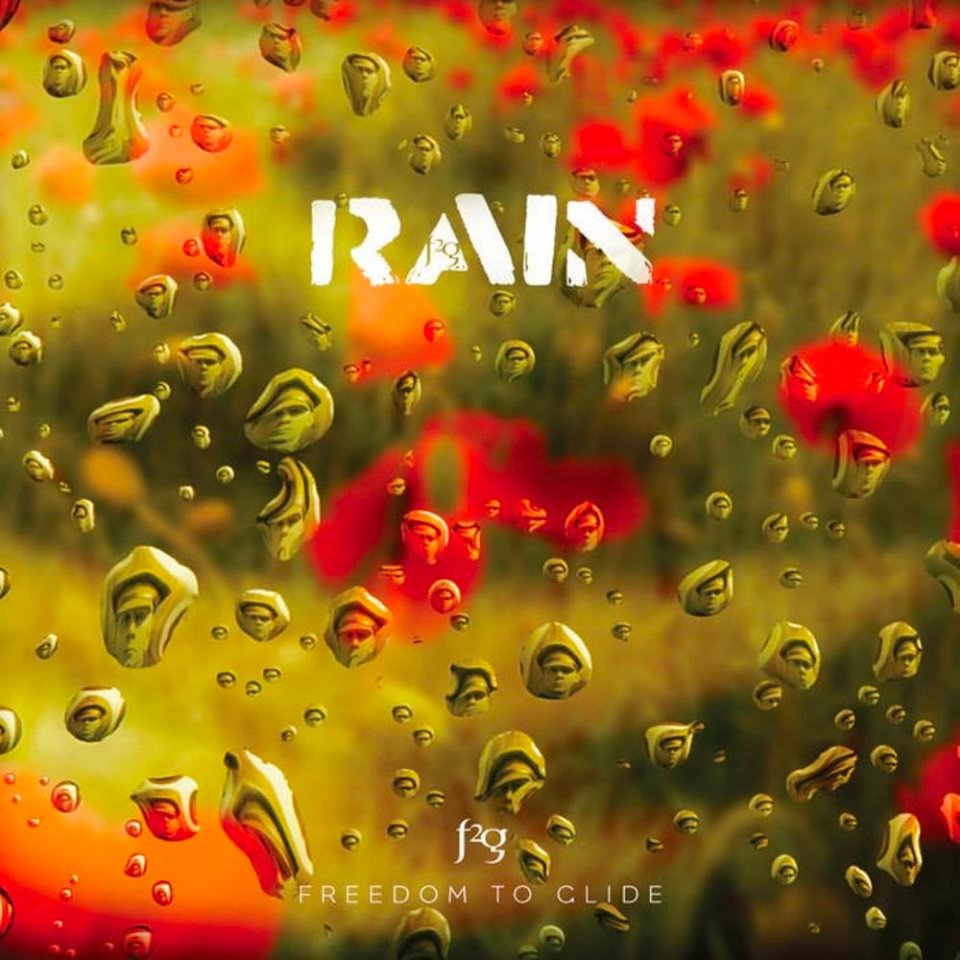 Freedom to Glide are a progressive rock band from England. Featuring Pete Riley and Andy Nixon, both of whom play in a Pink Floyd tribute band, Freedom to Glide draw together the sound of Pink Floyd, King Crimson and Porcupine Tree on an album that is very much the spiritual successor to ‘The Final Cut’ with its conceptual theme of the costs of war. Beautifully played and perfectly recorded, ‘Rain’ is a throwback to the sublime melodies and fluid guitar work of ‘WYWH’-era Floyd with a touch of ‘Starless and Bible Black’ era Crimson thrown in for good measure. Poignant and intelligently written, there is no surprise that the album gained a number of plaudits (including Prog Mill album of the year) upon its release.

Opening with ‘Rain (part 1)’ the band craftily repeat the trick of ‘shine on you crazy diamond’ with the music starting in a swell of synth sound (presumably not wine glasses though!) before introducing the gently keening guitars and after a slow, gentle build up, the very English vocals which recall David Gilmour crossed with Steven Wilson. Built around the heart-breaking lyric “so my brothers fell like rain” it draws the listener straight into the heart of the album’s concept whilst the melody is so haunting it will stay with you for days after. In the best progressive tradition ‘Anywhere Else But Here’ is a short, hypnotic segue that draws the listener to the harder edged ‘path of reason’ which adds a more Porcupine Tree feel to proceedings with its driving riff, subtle piano embellishments and funky rhythms. The music is recorded with amazing depth and clarity, allowing the melodies to shine out from the heart of the song, and it’s clear that a lot of work must have gone into achieving such a beautifully clean, organic sound.

Having indulged in rockier fare, Freedom to glide slow things down for the acoustic ‘Riders On A Wave’, a melodic and tender ballad that considers the necessary submission of ordinary men under arms to those in power in the hope that the latter know what they are doing. The music is beautiful, but for the ‘riders on a wave’ the position is hopeless and fate is dictated by faceless overlords whose decisions are never justified, explained or even criticised if things go wrong. It takes great skill to take such a difficult subject and turn it into such a beautiful song, but Freedom to glide make it seem easy. More complex and showcasing the album at its darkest, ‘Price Of Freedom’ covers the difficult topic of betrayal in foreign lands and leaves the soldiers lost and dying halfway around the world. Another brief segue (‘L-U-2’) is a simple vocal backed by lonely piano before the band utilise the well-worn trick of shuffling across radio stations to arrive at the lush melancholy of ‘Rain (part 2)’. ‘Angels And Stones’ is a short, dark track that is shrouded in sinister ambience and the dimming of the light, before heading back to the album’s central theme with ‘Rain (part 3)’.

One of the most ambitious tracks on the album, ‘When The Whistle Blows’ is a lengthy, two-part track that covers the experience of a soldier going to war with admirable lyrical ingenuity and quite remarkable musical prowess. Clearly the album is a labour of love and born of strong personal conviction, all of which is represented in the carefully crafted music and the sublime solos which are played with a fluid grace and elegance that few can achieve. ‘Trying To Grow Young’ is another segue that drifts dreamily into the somnambulant pulse of ‘Rain (part 4)’, a song that draws upon ‘Wall’-era Pink Floyd with a delay-enhanced guitar line and even a choir bought in to augment the refrain. Perhaps the most poignant moment sees the Ode of remembrance set to gentle synth on ‘Home Again’ before the album slips quietly into the instrumental ‘One Hundred And Twenty’. The final track, ‘Not A Broken Man’, deals, again with a grace and candour that can only come from a lifetime of contemplation upon the subject, with the survivor guilt and psychological wounds of those who do return from great battles and leaves, impressed upon the listener, a genuine empathy for those who have suffered the horrors of war.

When Roger Waters wrote ‘The final cut’, he crafted a powerful album and one that, with time, has grown in stature. However, his vicious polemic alienated some who felt he had politicised a topic that needed to be treated as a universal issue rather than one of any single government and, as a result, the terrible sadness that was communicated by that album did not reach as wide an audience as perhaps it should. ‘Rain’, to a large extent, readdresses the balance. By focusing on the very personal experience of a soldier at war, rather than on the political machinations that landed him there, ‘Rain’ is an album that can appeal to us all and draw sympathy for us all. The lyrics are perfectly written, balancing poignancy with historical accuracy and the dictates of rhyme and meter, and despite treading the well-worn theme of war, they feel as if they have something new and important to say about the subject – no mean feat. The music, meanwhile, is sublime on every level. With a sound that recalls ‘DSOTM’ and ‘WYWH’ in terms of clarity and depth and a level of musicianship that so very few attain, ‘Rain’ is a near perfect album that should be compulsory listening for progressive fans. A modern classic, Freedom to glide have created a true masterpiece that mingles beauty with sadness over its 63 gorgeous minutes. 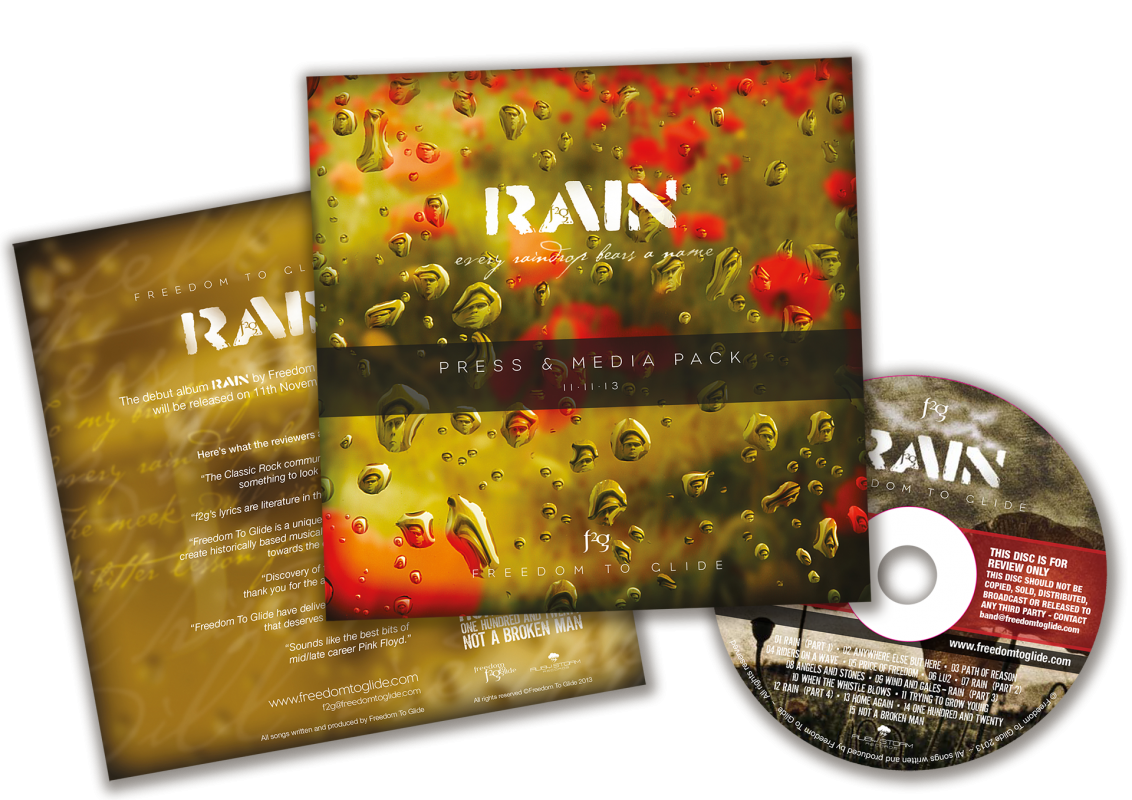